Sunday morning, marching bands took to the streets for a takeover of Ballard. A march and rally down to the Farmer's Market, followed by a takeover of a public square in Ballard.

A night of more performance insanity. Three more performances in three different venues in Georgetown, south of Seattle. Punched in the gut by a phenomenal performance by the bone-shaking Weapons of Marching Destruction. Played with Hungry March Band and a remarkable set with Eugene's Samba Ja. Picture Jake from Samba Ja rapping in Portuguese to an extended crazy breakdown version of our Ragga.
What do you mean silly?! This is beautiful!
Afterward, an after-party in the street with a dozen bands playing to a hundred dancers taking over the street. Police start showing up, at least a dozen cars, dropping flares, blocking streets, disco party police car flashers.

Officer: You have to move out of the street.

Drummer: What do you mean? (pointing at a dozen police cars and line of flares) You're blocking the traffic!

Officer: Come on now, this is silly.

Drummer: Silly? This (gesturing) is beautiful!

The officers walk away perplexed, shaking their heads.

And after the after-party, an after-after-party at a remote apocalyptic industrial area, a deafening drum jam, and Trash Orchestra plays flaming taiko. 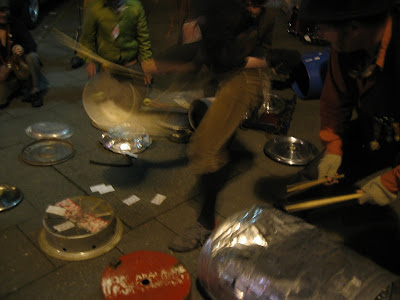 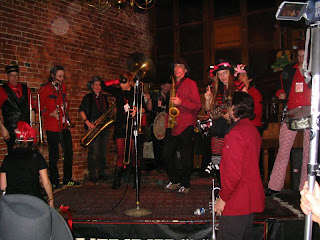 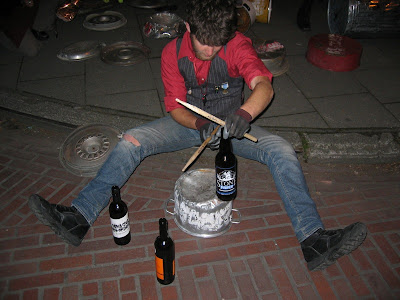 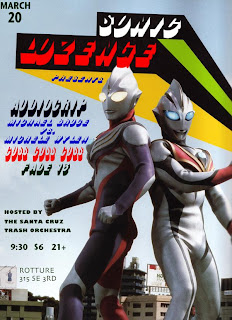 Last Night we rocked a club in SE Portland. In an obscure industrial part of town, through an unmarked door, up a dark stairway, an experimental music show, in which we were listed on fliers all over town as the hosts.

Two sets between performances of electronic looped, bent, sampled, modulated, and generated sound. For the entire rest of the trip a lively and ambivalent debate sprung up over the twisted nerdcore rap song, I Fucked the Giraffe. 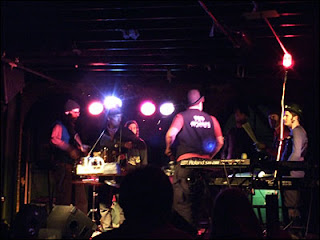 As part of a nationwide day of action to mark the fifth anniversary of the start of the Iraq War, 1500 to 2000 students in the Portland metropolitan area walked out of class on March 20.

Trash Orchestra was was there supporting the walkout, resistance to business as usual, youth liberation, and students taking greater control of their lives. It was thrilling to see 500 young people taking the street, demanding an end to a war that will affect their future. Hundreds of students chanting the lyrics to our songs. "Street by street! Block by block! Taking it all back!'

More than just symbolic, the walkout is also direct action, halting for at least one day the damage that these institutions do to our planet and our minds. Schools are preparing, preening, and educating students for entry into the middle-class world. This work -- something we consider the unquestioned and unavoidable dues of our citizenship -- and the consumerism that comes with it, is very much the problem, destroying what's good and beautiful on this planet and tearing apart the fabric of our relationships with each other and the Earth. Universities are very much part of the war machine, often doing weapons research and testing, administering weapons labs, and selling students into years of perilous military service.

Students took to the streets yesterday to say No to all that.
Posted by Wes Modes at 4:00 PM No comments:

Yesterday night we bombed through the night up to Eugene and pulled in very sleepy to this very sleepy Willamette Valley town. We'd managed to cram all of out instruments and stuff into the van and pull away from the Big Yellow House in Santa Cruz very close to when we were scheduled to leave.

I've not traveled with this many people before on a road trip, so I was surprised that we are getting along relatively well. The number of screaming knockdown fights and knife battles has remained relatively low. Only a certain general malaise and spaciness has reigned due to lack of sleep. Collectively, we might have gotten 8 hours of sleep. Blackbird Raum, Street Drum Corps, Gillian Welsh, blasting from the van on a marathon drive. Late in the night, a diatribe by Jimmy Swaggart on the hellish demon of drug use. Amen, brother Swaggart! 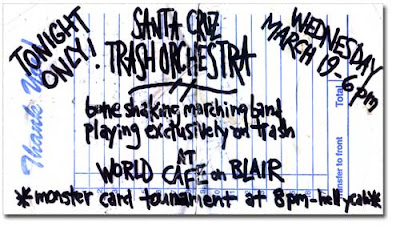 We played tonight at the World Cafe in the Whittaker Neighborhood of Eugene. Proprietor Bill, a friend of hobos, was kind enough to set us up on short notice. Delicious vegan pizza and fabulous beer, a light but enthusiastic turnout, and good practice for the next few days of marathon performance.

During breaks in the performance we overheard cute kids talking about Anarchism, and knew we had some kindred souls in the audience. Talking to them, we found they were from the Lorax Manor, a long-standing student co-op in town - a virtual mansion. Afterward, we were invited over to the Lorax for a rousing game of Monster Cards, a brilliant & creative DIY card game taught to us by sweet Portland kids years ago.
Posted by Wes Modes at 10:30 PM No comments:

Tomorrow evening we're taking off in a van we haven't yet rented, with stuff that we're still pulling together, on a journey with lots of loose ends. Exciting for us, because we've not ever had an adventure quite like this as a band. We're looking forward to road food and swimming nekid in rivers and performances in strange new places and meeting tons of great people -- maybe you?

See you in Eugene, Portland and Seattle. Catch us at the following gigs. If we know you're reading this blog, we'll also try to update it on the road. So send us a note.


Everything is ready to go, mostly packed, instruments tuned, etc. And, uh, oh, do you have a credit card we could use to rent the van? Trash Orchestra was there.
Posted by Wes Modes at 8:22 PM 1 comment:

This Friday, we'll be joined by Oakland's amazing Brass Liberation Orchestra and Santa Cruz Guerilla Drive-In for a fundraiser in support of Trash Orchestra's west coast tour -- including an anti-war march in Portland, performances in Eugene, and a gathering of radical street bands in Seattle. I hope you'll join us for an exciting evening.

Please join us for a Trash Orchestra Benefit in preparation for our tour to Seattle's Honk Fest West. Performances by Santa Cruz Trash Orchestra and the East Bay's amazing Brass Liberation Orchestra. With the help of Santa Cruz Guerilla Drive-In, we'll be showing the film Honk You Very Much -- a documentary about radical street bands -- and Auto Re-Vision -- a short doc about a handful of kids sealed in a room, who convert an automobile into an array of musical instruments. Also joining us: the Hoopalites and Lighthouse Fire Dancers.

Trash Orchestra Benefit
Friday March 7th at 7:00pm
at the Pacific Cultural Center
Seabright & Broadway
$10-20 sliding scale
Getting together two ear-shattering marching bands in one place for one night is just our way of promoting hearing loss within our community. See you on March 7th.