Modesto: Downtown is Ours!

Reportback from Modesto Anarcho! who said:

Anarchist Cafe' last night was a large success. There was lots of free food, all of which was free - either gotten from places that throw away lots of food, or businesses that were going to throw good food out. Lots of literature and zines were taken by a variety of people. Various distros (Modesto Anarcho Distro and Wingnut's Liberation Project) had some good conversations with people. Someone from KQRP-LP (106.1 - local indymedia station) was on hand to video the event, and recordings from the Cafe (largely the band playing) will be shown on the local cable access program (channel 14) and on 106.1. Stay tuned. 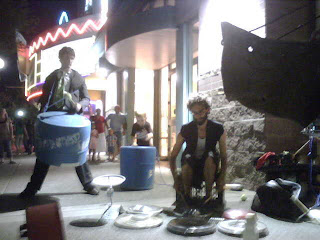 The Santa Cruz Trash Orchestra was off the hook. They played a pretty long "set" and they even got some good feedback and response from the crowd, several of which joined in to play on the "instruments". Probably the highlight of the set was when the band started marching around the downtown playing music.

Problems with police were nil. While we hate to fall back on "our rights" and the language of the state to justify our actions - we were totally within our "legal rights" to be in the downtown (as long as things were 'peaceful', we didn't sell anything, and we didn't block traffic). The police did come out, including the police chief, but since this was a "free speech" event, we didn't need a permit even though they said we should get one.

The event last night got alot of people together, talking about anarchist projects, having fun, and also just creating a space where people could connect and act with each other where we felt like we had some power. The event was also good because so many "normal" people were stopping by, eating free food, picking up zines, watching the band, etc. While the size of the "audience" for the cafe was hard to pinpoint, we'd say probably about 30-50 throughout the night, at any given time.

Thanks! Until next time, Modesto Anarcho Crew
Posted by Wes Modes at 4:18 PM